While the filmography of Wes Craven can be pretty hit and miss, credit is due to his prolific work and general antipathy towards churning out sequels (with the noted exception of Scream). He’s created a number of original works and one worth mentioning is the film Wishmaster and the films which followed it. 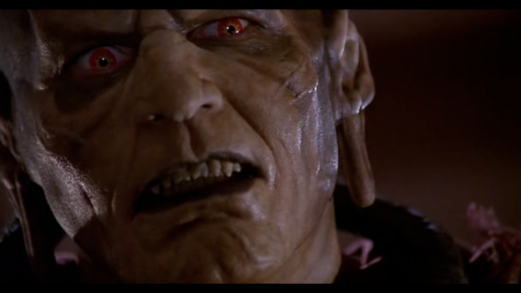 The movie starts with an epitaph and a lot of effects from neat to silly before the djinn is locked away in a special gem. Skip to modern day with our main character who has that tragic backstory which simultaneously drives her with this feeling that she always could have done more in a clinch at the same time holds her back from living life fully. Unwittingly awakening the djinn creates a bond which causes her to have vague visions when wishes of others are granted so she knows she’s in a horror movie. Laurie Strode not knowing she’s in a horror movie is fine for the first Halloween because Michael Myers is pretty easy to grasp conceptually as he was at the time just an escaped mental patient. With this movie it’s essential for the heroine to know what she is dealing with and for the sake of pacing she needs to uncover tidbits of info over the course of the movie instead of an info dump in the third act.

You probably know of it as the evil genie movie and that sounds goofy. Yes, it is goofy, but I think a lot of good horror walks that line between the terrifying and dementedly humorous. The fact that the djinn preys on others through granting wishes does give us some insight into the victims and what matters to them for some minor characterization. A spree killer is frightening in the animal sense, but a tempter can be terrifying in holding a mirror to us with a moral attack.

With a lot of slasher flicks, it often devolved into the killer shrugging off damage that aught to make him faint in shock or outright kill him. So no matter how elaborate or over the top the means of dispatching the killer… it never feels adequate and definitive, and risks coming across as a copout. By contrast, we get a contest of wits as the djinn is unstoppable by conventional means but also can’t kill the heroine until she frees the rest of his kind with her third wish, and that alone makes for a refreshing change of pace.

The movie can be painfully 90s at times, and so hasn’t aged very well. My biggest critique of the movie is the djinn itself looks like a Power Rangers monster of the week. When he acquires a human disguise to move about he comes across as far more menacing and devious than in his true form. Opting for a suit instead of crappy CG for the djinn itself is a relief, and once freed from its prison the creature does look kind of cool in its malformed, incomplete state. Still a pretty good movie and worth seeing. 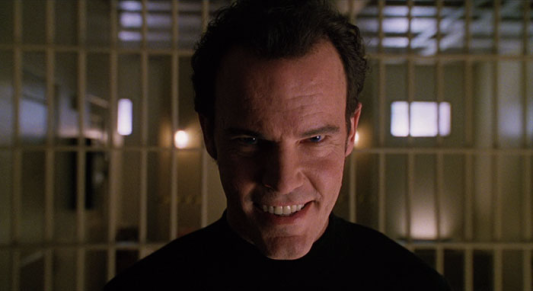 Notable as it is a direct sequel to the previous film. None of the previous characters show up, but the beginning of the film depicts the main character uncovering the gem with the djinn where it was secreted away in the first movie’s ending. A heist goes wrong, which causes the djinn to be set free again but for reasons takes the fall for his awakener’s crimes and Eastern European gangsters get involved. Also noted in that this follow-up had been widely reviled.

There’s very likely a combination of points on which the movie was so poorly received. First and foremost, it was made for TV. Have not heard anything about differences between the TV and home video version, but I assume the cursewords were bleeped out or muted when it was on television. There is some blood and gore, and I think fairly consistent with the previous film if only marginally toned down.

The second part is the religious angle. One of the major characters is an Orthodox priest and I assume part of why the movie was hated had to do with him trying to apply Exorcist rules to a completely different movie. When you apply real world religion to a supernatural threat outside that tradition, you create this unpleasant tension where you either make the beliefs look ridiculous (or say something about that set of beliefs which is insipid/wrong) or you kill the stakes with the knowledge that God could nuke the antagonist from orbit and doesn’t for reasons. 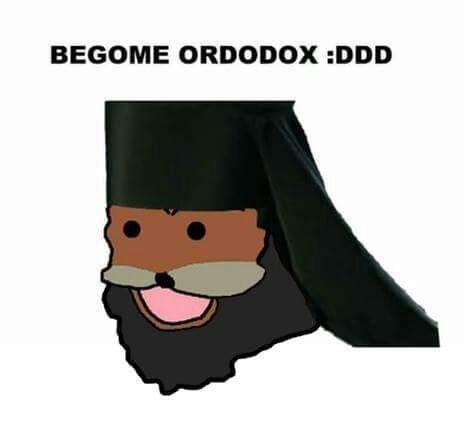 You heard the man… walrus… thing. What the HELL is it? Memes are weird sometimes

What might have also pissed people off was a sleazy woman having an arc where she becomes less trashy. Though in retrospect that development is more of a blessing as her look becomes less dated and an embarrassing eyesore. Continuity might have also been an issue as the number of souls the djinn needed was cranked up and his human disguise carried over even though he probably should have lost it. Critics may have a point in the souls area, but by virtue of the actor’s presence I think the movie is better served not fussing over the rules so they could keep using him.

Yes, this installment is somewhat derivative, and where it isn’t derivative it goes in a bananas direction, but that isn’t necessarily a bad thing. I thought the inclusion of a character willing to bargain with the djinn for personal gain was a nice touch, and putting a supernatural evil around more mundane deviancy and wickedness was an interesting idea. As far as sequels go, I think it had more going for it than against it. The movie also benefits from hindsight as far worse sequel immediately follows. 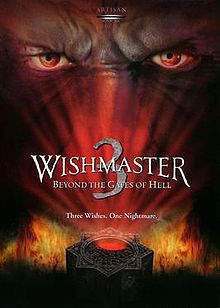 Wishmaster 3: Beyond the Gates of Hell

Fuck this movie sideways. My hatred for this movie is on par with my disgust for Ninja Resurrection with its false advertising of being a Ninja Scroll sequel. Looks cheap, is cheap. The one thing it gets right is a new human disguise for the djinn.

A magic sword is used to kill the djinn. I believe this is sufficient to explain why the movie is utter garbage. 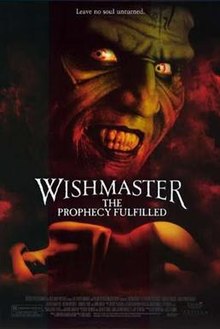 Maybe the prophecy, but not the audience

The only thing more confounding than the fact they decided to make another movie after thoroughly ruining the franchise is the movie having a few good ideas. This one is about a married couple several years after the husband was rendered an invalid by a motorcycle accident. What makes it interesting is instead of a fresh shock and sudden derailment of their life, they opted to have the characters in a status quo where the mutual resentment has had time to fester. The husband is frustrated by his debilitated state and lashes out at the wife, and the wife is frustrated by how she’s had to hold it together and tend to the broken shell of a man she loved deeply and she lashes out at the husband. Frankly, the setup deserved a better movie.

Hovering around the unhappy couple is their lawyer who is too obvious about his romantic interest in the wife, he ends up becoming the skinsuit for the djinn’s human disguise. Normally, the djinn would start to collect souls from others as a requirement for the prophecy and/or to presumably allow him to use powers outside of wishes asked of him. However, the situation is such that the wife who awakened him readily provides him with two wishes, and then she makes a third wish. Yeah, we’re gonna get knee deep in spoilers because the movie’s not good enough for me to recommend, but has plot elements interesting enough to be worth putting under a microscope.

So the wife has been dazzled as the djinn dramatically changes the life of the couple for the better, but there’s still a lot of tension between herself and her husband. She laments she wishes she could fall in love with the lawyer, the disguise of the djinn. This hits our monstrous antagonist with something of a paradox, to be able to fulfill the wish it has to come from a genuine change of heart from the one who made the wish. I think this had potential because the djinn is a thing of malice and evil, and in order to make the wish come true the entity might have to fundamentally transform itself to be something loveable. Yes, earlier movies established impossible wishes like abolishing all evil are invalid and don’t count, but the third movie ruined the series so I’m willing to give some slack in breaking lore for the sake of telling an interesting story.

On account of the subtitle, the idea sprung of changing the djinn’s nature could both fulfill the prophecy but also give humanity some chance at surviving. The movie fails to offer a proper payoff for the djinn conflicted by the need to be loved and its own evil nature. At the climax of the film he just devolves into a generic badguy. Of course, this movie isn’t billed as the finale because it ends in a way which provides closure to the series, they just ran the series into the dirt and there was no bringing it back. To add insult to injury, they kill the djinn with the same goddamn magic sword from the previous movie. That’s just confounding as they managed to fall into the same trap as other horror movie franchises where the death of the antagonist feels like a copout to end the story.

I think a series where characters really have to think their way to victory have a unique danger of rapidly declining in quality, or maybe that decline is much more obvious compared to an action series where one character just needs to be tougher or have stronger plot armor. Still, we got a couple decent movies out and it’s a little surprising they decided to give it another go after one sequel was poorly received and the one after that was hot garbage. In a screwy way, it’s fitting that relying on a djinn for anything is a guarantee of disappointment much like the disappointment of the later part of the series.